Our students impressed us so much this summer. These kids from different backgrounds and experience came together to create 8 client videos and filmed an entire episode of The Reel Teens: Pittsburgh – all in 6 weeks time.

They explored and honed new skills in addition to adding their own creative flair to their projects. Their homage to Batman for 412 Food Rescue killed it. Their professionalism while working for Earthen Vessels Outreach impressed their mentors and the client. Their dedication to teamwork and growth showed that the future generation of media makers in Pittsburgh has a bright future.

Some of the girls in our Summer Intensive meeting Kim Moses.

But, what would summer be without a little fun?

Our students got to have some fun, too. They visited the set of NBC’s new show, “Gone,” and met renowned producer and Donora native, Kim Moses. They played some video games. And on their last day, they got the chance to learn some stunt secrets from Steel Legion Stunts. Hi-ya!

Stay tuned because our students will be back to work in September.

We’re excited to have our students returning in September. We can’t wait to share more of their work with you. While you wait, check out some episodes of The Reel Teens and follow us on Facebook to learn more about what we’re doing in the meantime.

We’re excited to share with you some great news from Andrew Dewey and MIC PGH, our Music: Let It Make (Not Break) Your Film workshop facilitators. Check it out below!

Thanks to everyone who came out to celebrate #PGHonBroadway! As they say, the third time is a charm. We were charmed by all of the incredible Pittsburghers who came out to show their black and gold pride. Stay tuned for updates on The Reel Teens: Pittsburgh’s coverage of the event. In the mean time, check out the article in The Post-Gazette. We’ll see you all again in eleven years! 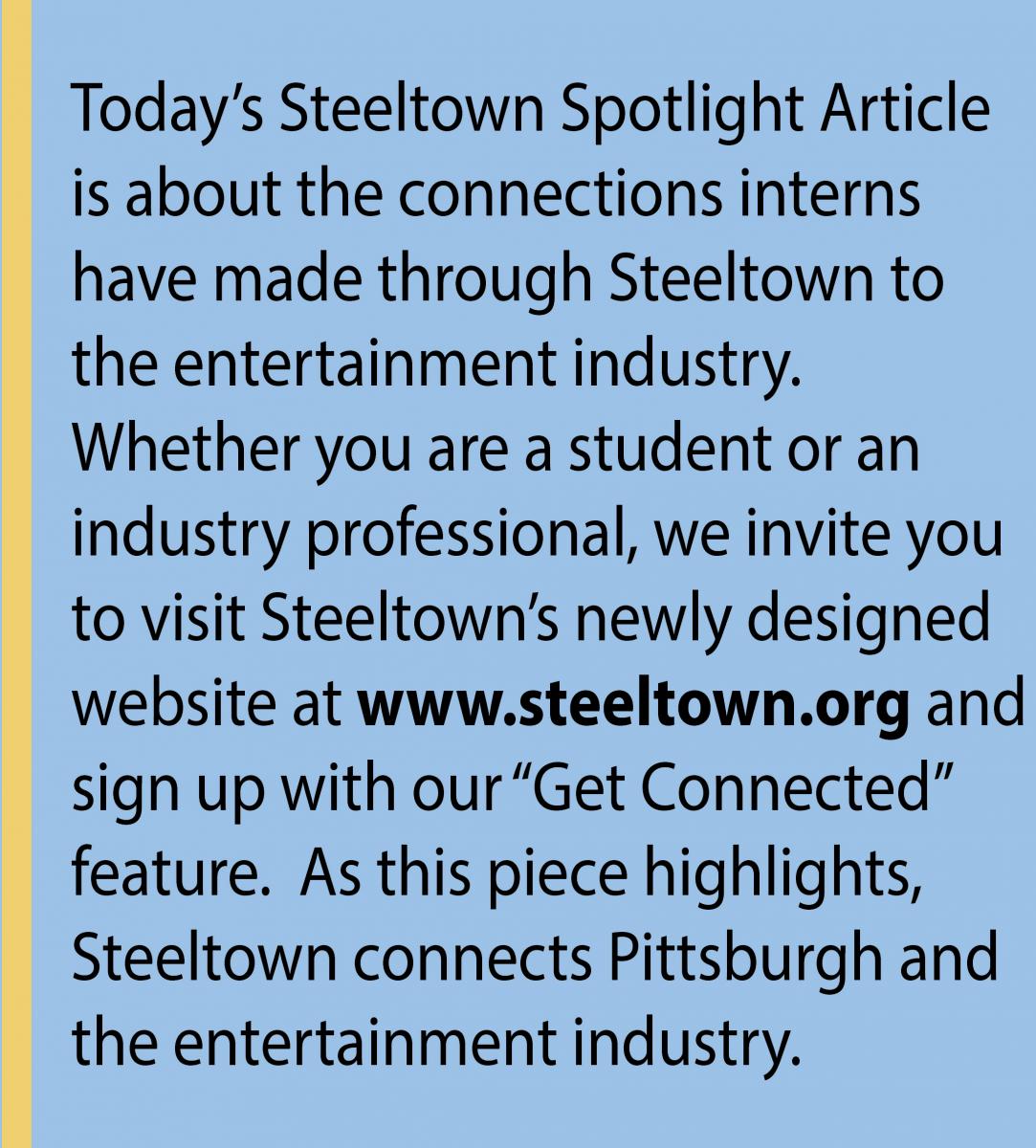 What do “Jiro Dreams of Sushi” producer Tom Pellegrini, MTV’s “The Buried Life” associate producer Ryan O’Shea, and  “The Next Food Star” production assistant extraordinaire Kat Weiler have in common?  They are examples of the many Steeltown interns now working on major film and TV productions after having gained valuable experience and built connections and relationships by working for the Steeltown Entertainment Project during college.

“Everybody wants to get producer credits as fast as possible, but you really have to put in the work first,” says Pellegrini, Steeltown’s first intern, who started in the kitchen of Steeltown co-founder Ellen Weiss Kander, and whose internship at Steeltown got him the connection with comedian Louie Anderson that lead to his first job in Hollywood as an assistant and creative executive.  “Steeltown’s a good training ground.  There aren’t many opportunities to get that kind of experience in Pittsburgh.  Working at Steeltown really shows you how the entertainment industry works.  You deal with the biggest players in Hollywood through Steeltown. Interns work on short films and get connected to people who are Hollywood heavy-hitters, and this ultimately helps [them] jump from Pittsburgh to L.A. or New York.”

“Steeltown is great for getting hands-on experience and making connections that you can’t find anywhere else,” agreed O’Shea, whose experiences with Steeltown included work on the Smithsonian Channel documentary “A Shot to Save the World,” a Steeltown co-produced regional version of “The People Speak” featuring Matt Damon and John Krasinski, and a WQED/Steeltown produced talk show pilot with “Two and a Half Men” and longtime Steeltown adviser director/producer Jamie Widdoes.  “There’s something for everyone, regardless of your particular interests. I’d definitely recommend looking into the organization and finding out more.”

Kat Weiler, a University of Pittsburgh communications major and former captain of Pitt’s women’s soccer team, got her first television production experience working on the Jamie Widdoes talk show pilot, and before she graduated found herself with a job offer to work with Jamie and his producing partner Peter Isacksen on their innovative Subway sponsored webseries, “4 to 9ers,” in Los Angeles.  “Because Steeltown has small staff, interns get a lot of hands-on experience, which is great. I got a lot of experience just because I was given the task and was trusted to do it.”  Weiler has gone on to parlay that first job into a series of production gigs on various shows, including on “The Next Food Star,” which was produced by the same company that recently shot a pilot, featuring Iron Chef judge and celebrity chef/restaurateur Donatella Arpaia, in Pittsburgh with the WQED/Steeltown Incubator. “Working really closely with Hollywood advisors through Steeltown is great and opens a lot of doors.”

Pellegrini and O’Shea have also gone on to work on numerous film and television productions.  In addition to his producing work on “Jiro Dreams of Sushi,” which was one of the highest grossing documentaries of 2012, Pellegrini co-produced two films that premiered at the Sundance Film Festival: “Sympathy for Delicious,” starring Mark Ruffalo, Orlando Bloom, Laura Linney, and Juliette Lewis; and “Hesher,” starring Natalie Portman and Joseph Gordon-Levitt.   He also served as an executive on the five-time Tony Award nominated Broadway show “Rock of Ages,” and co-produced “Barry Munday” starring Patrick Wilson and Judy Greer.  O’Shea, in addition to his work Associate Producing “The Buried Life,” has been a production assistant on “The Dark Knight Rises,” “The Perks of Being a Wallflower,” “Jack Reacher,”  “The Fault in Our Stars” and Nickelodeon’s “Supah Ninjas.”

As a closing bit of advice for students looking to jump-start a career in the entertainment industry, O’Shea offered that “the most important thing anyone interested in the entertainment industry can do to get started is put in the effort. Show up to events and make connections. Don’t ever say “no” to an opportunity, and volunteer whenever possible. Steeltown is perfect for that.”

Pittsburgh Film Community, we want to hear from you.  If you’re a college student seeking an internship, a film or industry professional, an emerging or independent filmmaker, or an educator, go to filmmakers.wqed.org/get-connected to learn more about what Steeltown can do for you

Make a movie. Make a difference. Have your voice heard.

Steeltown believes that a camera, an idea, and a voice can change the world. Our Take a Shot contest empowers teens in Southwestern Pennsylvania to share their stories by creating digital media that matters. Now’s your chance to have your voice heard. Whether you want to create a documentary that inspires social change or film an imaginative short with your friends, the 2016 Take a Shot contest is your opportunity to tell us your story.

Join us as we celebrate Indie Filmmaking!
November 9  |  7:00PM  |   Regent Square Theater
Steeltown’s 7th annual event at the Three Rivers Film Festival is an evening to celebrate independent filmmaking in Southwestern Pennsylvania. The event will feature the first Steeltown Indie Class and showcase short projects made around the region. Local filmmakers will also share their experiences about making films here in Pittsburgh. Steeltown Indie offers educational and mentorship opportunities for local filmmakers as well as cash grants to help make their projects happen.

Following the event will be a networking reception!
PURCHASE YOUR TICKETS HERE!
Many of the filmmakers and films screening at this event have achieved regional and national recognition such as: screening at Sundance, an Emmy Win, Film Factory Winner, and numerous awards and screening at festivals.