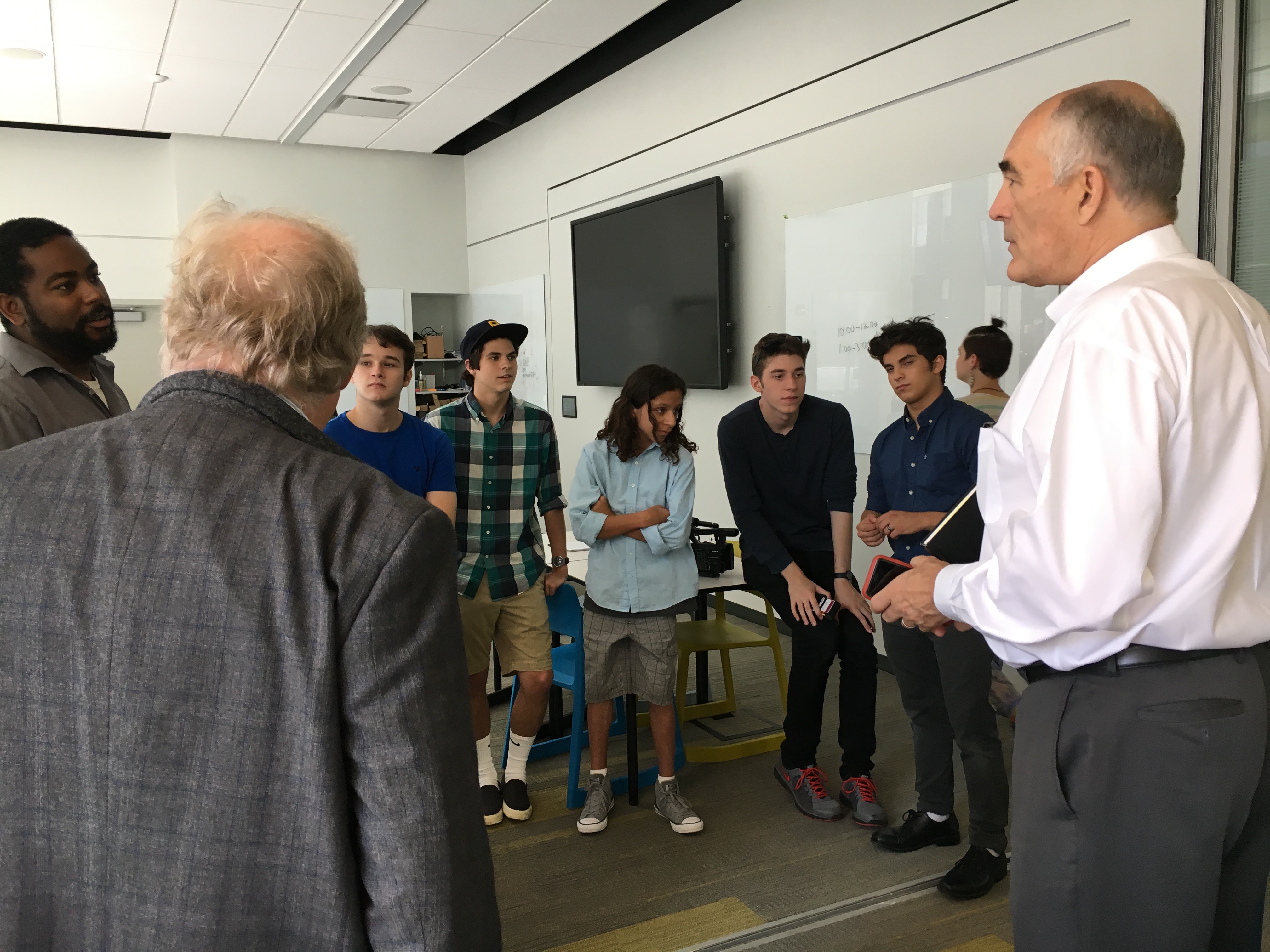 Our students impressed us so much this summer. These kids from different backgrounds and experience came together to create 8 client videos and filmed an entire episode of The Reel Teens: Pittsburgh – all in 6 weeks time.

They explored and honed new skills in addition to adding their own creative flair to their projects. Their homage to Batman for 412 Food Rescue killed it. Their professionalism while working for Earthen Vessels Outreach impressed their mentors and the client. Their dedication to teamwork and growth showed that the future generation of media makers in Pittsburgh has a bright future. 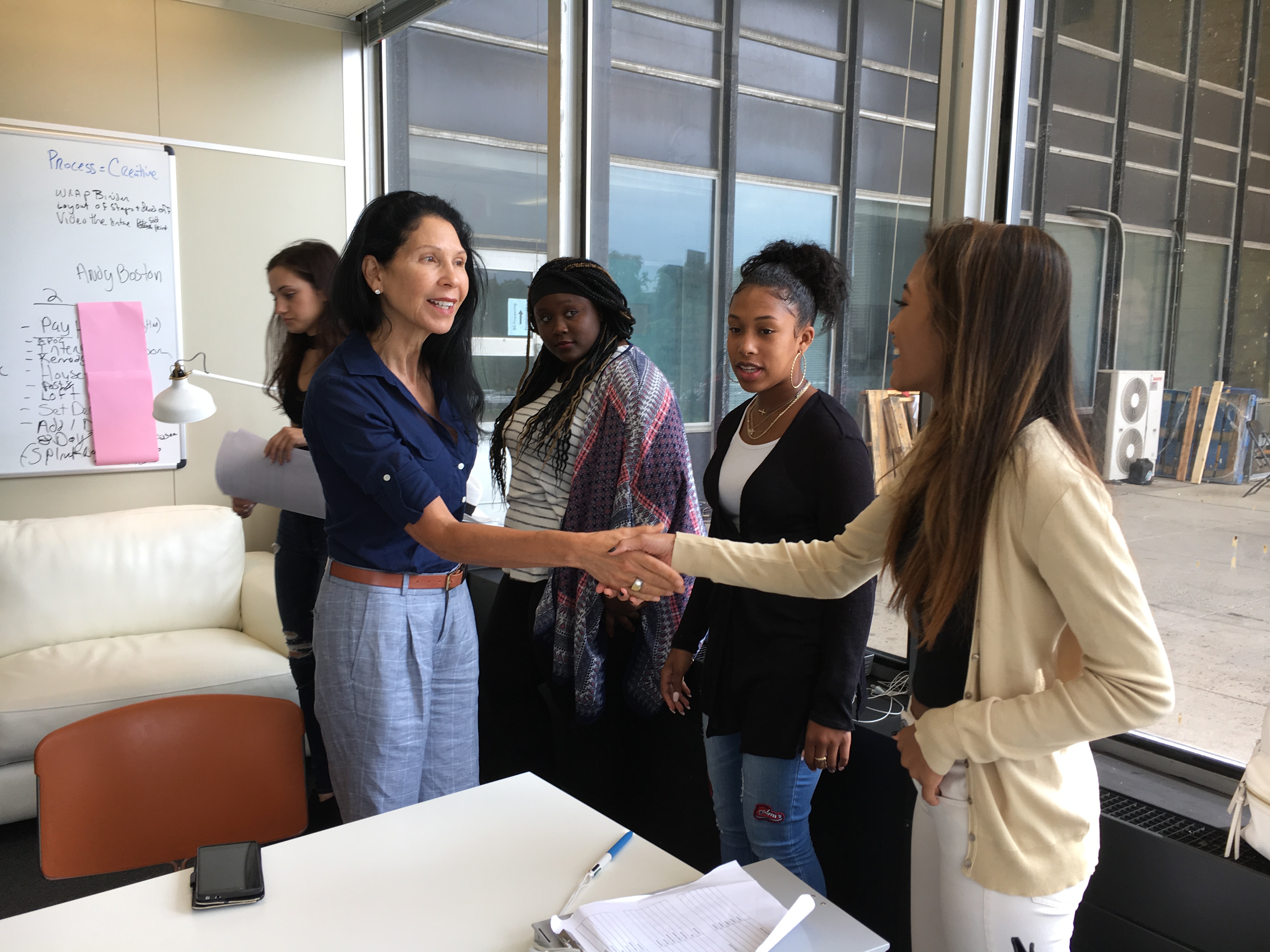 Some of the girls in our Summer Intensive meeting Kim Moses.

But, what would summer be without a little fun?

Our students got to have some fun, too. They visited the set of NBC’s new show, “Gone,” and met renowned producer and Donora native, Kim Moses. They played some video games. And on their last day, they got the chance to learn some stunt secrets from Steel Legion Stunts. Hi-ya!

Stay tuned because our students will be back to work in September.

We’re excited to have our students returning in September. We can’t wait to share more of their work with you. While you wait, check out some episodes of The Reel Teens and follow us on Facebook to learn more about what we’re doing in the meantime.

Our Youth & Media program kept themselves busy this summer by giving 18 kids from around Southwestern PA the opportunity to learn leadership skills and the tools to start a career in the entertainment industry.

We partnered with Three Rivers Workforce Investment Board & Learn and Earn Pittsburgh to give Pittsburgh’s youth an opportunity to jumpstart their careers. During the summer, our crew got the chance to film Steelers great, Jerome Bettis, as well as meeting and filming other kids working at different organizations within the Learn and Earn program.

What’s summer when it’s all work and no play, though? Our team also participated in field trips that exposed them to all that Pittsburgh has to offer. Plus, they loved the free pizza perk!

We’re so incredibly proud of the youth that we worked with this summer. Despite their age, they showed impressive responsibility and work ethic, and we know they’re destined to make a mark in Pittsburgh and beyond. Check out the hard work they put into the video below that they created for Learn and Earn Pittsburgh!

Vanessa German is the founder of ARThouse, a community art education initiative based in the Homewood neighborhood of Pittsburgh. At the ARThouse, Vanessa, an internationally acclaimed sculptor and artist, welcomes neighborhood children, teaches them about art, and gives them the materials and the space for them to express themselves via art. The ARThouse started when some kids expressed interest in Vanessa’s work as she created artwork on her Homewood front porch. Since its inception in 2012, it has outgrown Vanessa’s porch, and even had outgrown the vacant Homewood house where the program began thriving. The program is ready to move into a new, larger space, this one with an attached vacant lot. The space would need a lot of work to make it safe for kids, and Vanessa is unaffiliated with any larger non-profit or funding source, so she knew it would take a lot of help to get the ARThouse on people’s radars and to secure funding. Steeltown’s Youth & Media program believed that the key to helping the ARThouse was telling the story, and they quickly agreed to help.

Encouraging the telling of stories is at the heart of the mission of Steeltown’s Youth & Media program, which is dedicated to inspiring and instructing teens to become content producers. The first step in telling the story of the ARThouse must be to turn the story into short video, so as to capture the sights, sounds, and most importantly the emotion that surrounds what goes on at the ARThouse. Our team went to interview Vanessa and capture raw footage of the ARThouse experience, showing what a blessing and a joy it has been to the kids of Homewood. We then undertook the careful task cutting, editing, and piecing together the footage to turn it into a story. (click here to watch the video)

The next step was creating a way for interested parties to contribute funds. An online crowd-funding site seemed to be the best way to help raise the money necessary to make the new home of ARThouse a reality. There are many crowd-funding options out there, but we decided to use Indiegogo, which has options that allow users to keep the funds raised even if they aren’t able to reach your fund-raising goal. This is important, because with the ARThouse, unlike with a for-profit company seeking an exact amount of funding, every little bit helps. The Indiegogo site also needed written content to help build it out and detail the way the funds would be used—plumbing, electricity, paint, flooring, windows, drywall, fencing, roofing. The site also provided a dedicated home for the video.

With the Indiegogo campaign live, we began receiving support from friends and social media followers, but we determined that it would take some working with local and regional news media to help share the story to an even broader audience. We reached out to news outlets who had shown an interest in Vanessa’s work in the past, who might be interested in a follow-up story. We also considered the broad news appeal of Vanessa and the ARThouse, spanning the arts, business, community, and education sectors, and targeted news outlets who would be interested in the story from any and every one of those angles. After this research, we tailored specific media pitches to targeted reporters and producers at news outlets across all of these categories, sending them the news release and additional details relevant to the nature of their coverage.

Our research and writing work ended up with a few significant placements, including one for KDKA-TV on Jon Delano’s “Sunday Business Page,” a weekly public affairs program that features individuals who are making a difference in the Pittsburgh region, and the world. We also received coverage in the Pittsburgh Post-Gazette in a section called “City Walkabout,” which focuses on beat writer Diana Nelson Jones’s coverage of Pittsburgh’s unique neighborhood. Both of these placements were more than just general news coverage—they are outlets that love to promote the good that is happening in Pittsburgh, and they have regular viewers and followers who are looking to these sources specifically to tell them about stories like Vanessa’s.

With the help of the video, the Indiegogo campaign, and the media placements, Vanessa German and the ARThouse have raised over $36,000 toward the purchase and renovation of the ARThouse’s new location. Although this particular campaign is closed, Vanessa is always looking for more funding to help. Click here to donate to the ARThouse, and stay tuned for future campaigns and opportunities to help.